Patrizia Bach:
Digital Interpretation of Walter Benjamin's marks  in his notes and materials on the Arcades-Project (1928–1940)

[…] Everything that has been coded can become the object of a coding in turn, which is why the interpretation of Benjamin’s systems of symbols as coding operations legitimizes another visual coding of the material: Patrizia Bach’s “arcades project,” her website on Benjamin’s Arcades Project, is published in part in the present catalog alongside her drawings and city maps. Even if it seems that everything has been said about Benjamin’s project, not everything has been done yet, and so Patrizia Bach has translated the graphic connections found in Benjamin’s late notes and linked them according to instructions from their author.
Starting out from the systems of symbols, Bach carries out the free navigation established in this system throughout The Arcades Project, thus carrying out something that was inherent in The Arcades Project but was not possible because of its limited media. Bach implements this digital coding in the most objective and neutral form possible, in the process ordering and grounding speculations about the arrangement and system of the late Baudelaire project.
Her digital system of symbols suggests something beyond the previous order of the convolutes without exceeding the framework of The Arcades Project; they exist outside the book but very much within Benjamin’s own project. This makes possible transversal orders and readings of The Arcades Project, as Benjamin presumably imagined them, as he conceived them and laid them out in his final drafts, and as they exceeded the framework of the linearity of the book time and again. The stroke of genius of Bach’s project is that the new coding results from a simple operation: by reversing the approach to The Arcades Project, which Bach treats not philosophically and scientifically but rather visually and graphically: Bach approaches The Arcades Project not like generations of humanities scholars before her by way of Benjamin’s unordered metatheoretical reflections in the infamous Convolute N. Rather, she opens up The Arcades Project by way of the systems of symbols that necessarily escaped the view of humanities scholars blind to design. With this simply complex operation, Bach’s digitalization takes Benjamin’s symbols seriously; seriously as visual phenomena, as notations that can both conceal or reveal their own knowledge. She transcribes, sometimes by hand, as in the notations published at the beginning of this book, Benjamin’s late notes into an order that is visual as it is virtual, resulting in unsuspected paths through and new connections within the thicket of The Arcades Project.
Bach’s digital transcription creates spatial relationships within The Arcades Project in which it becomes possible to conceived of the simultaneity and mutual interpenetration of different layers of time. It installs transversal connections that reorder space and time. With this realized utopia of a different arrangement of knowledge, Bach ultimately succeeds where most of theorists working on Benjamin fail: achieving distance from the overpowering Arcades Project and finding one’s own language for and position on the work. For with the same rigor with which Bach approached Benjamin, she ultimately distanced herself from him again. By means of her drawings she developed her own atlas on the arcades and addressed to it her own ideas and own riddles. Her very choice of themes—ennui, crinoline, gender—demonstrates here own, intimate reading of Benjamin. What had begun as a visual explanation of Benjamin, ends with his artistic mystification. […]

Knut Ebeling: Constellations of the Historical
On the Coding of The Arcades Project by Patrizia Bach, in: Patrizia Bach: Arcades-Work, Drawings on Walter Benjamin, pages 238–247 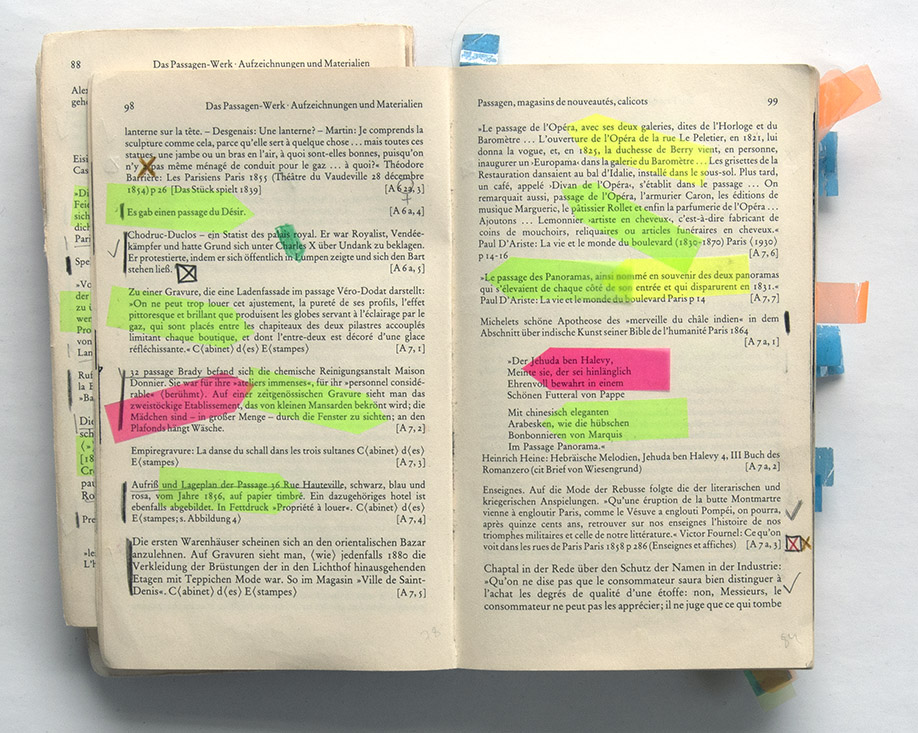 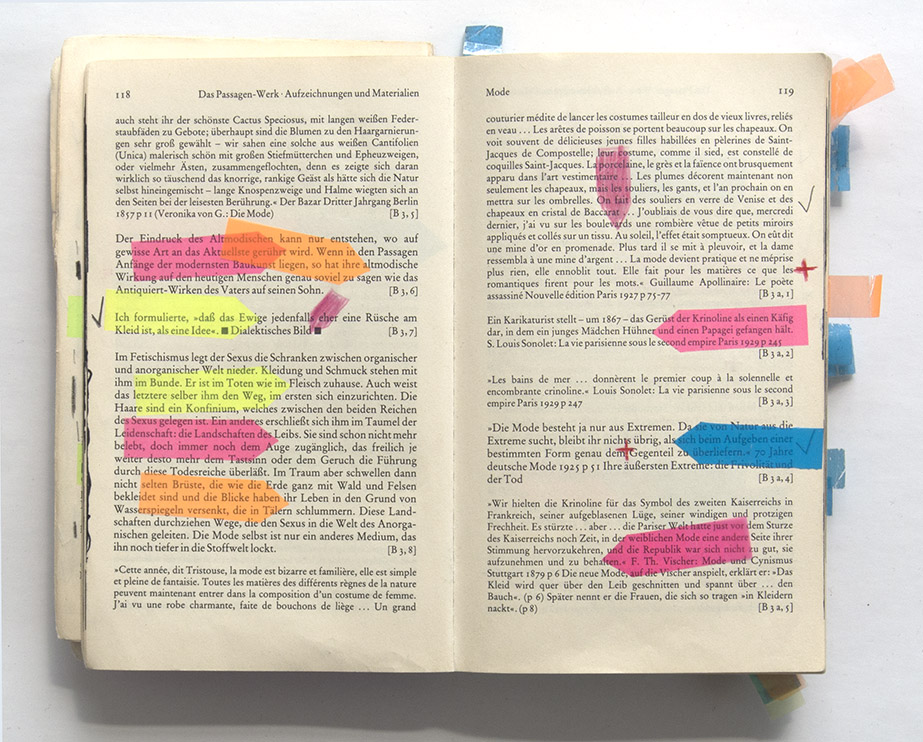 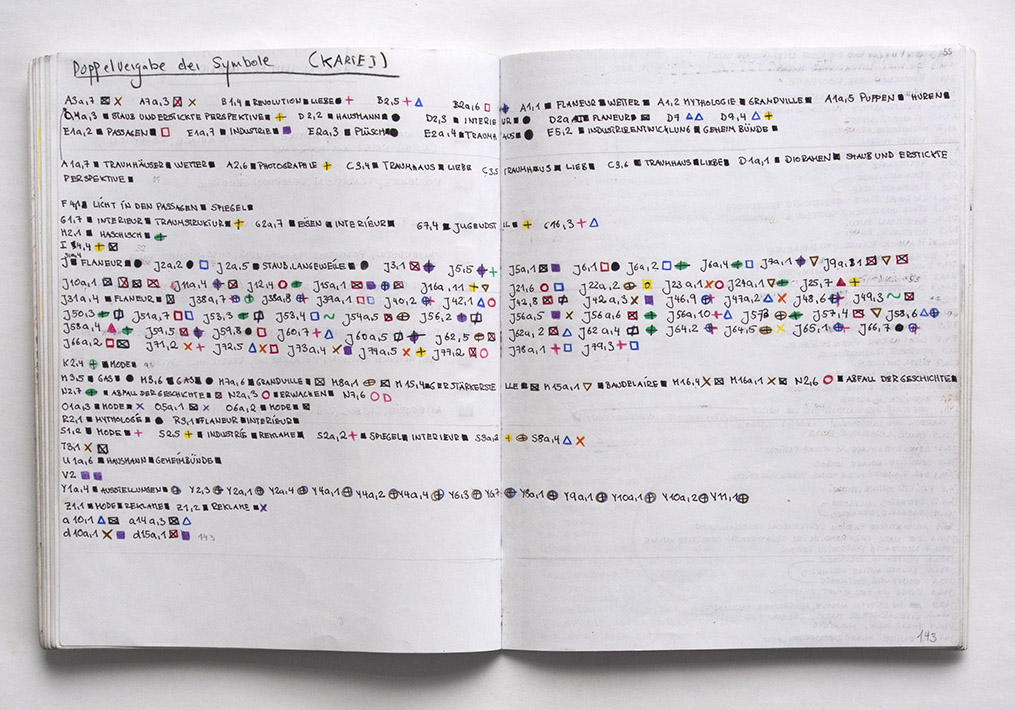 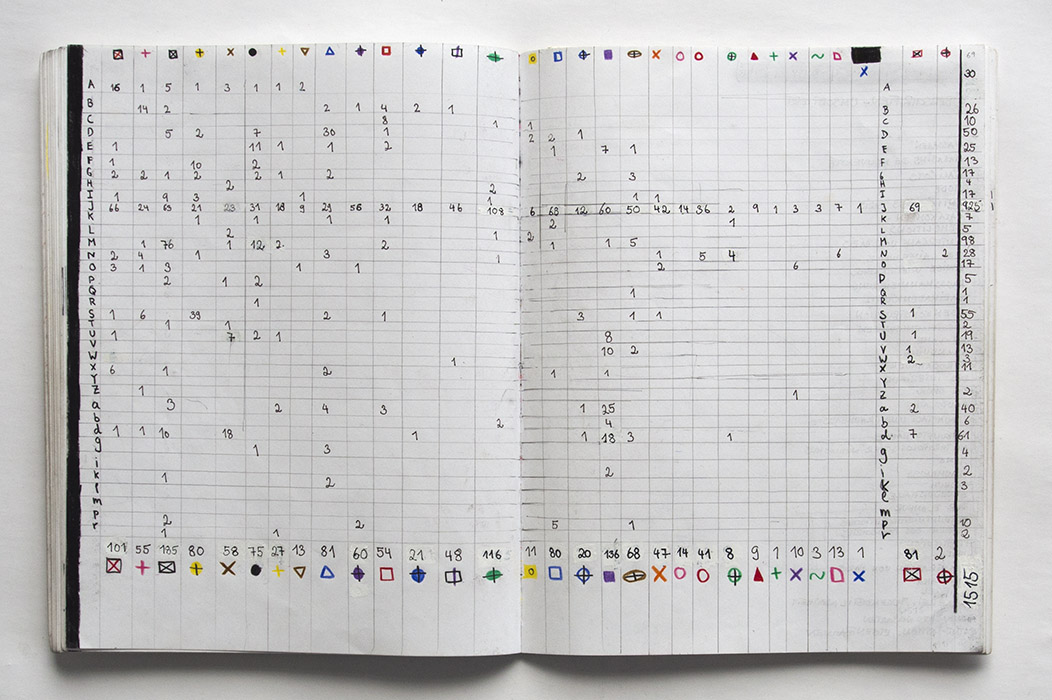 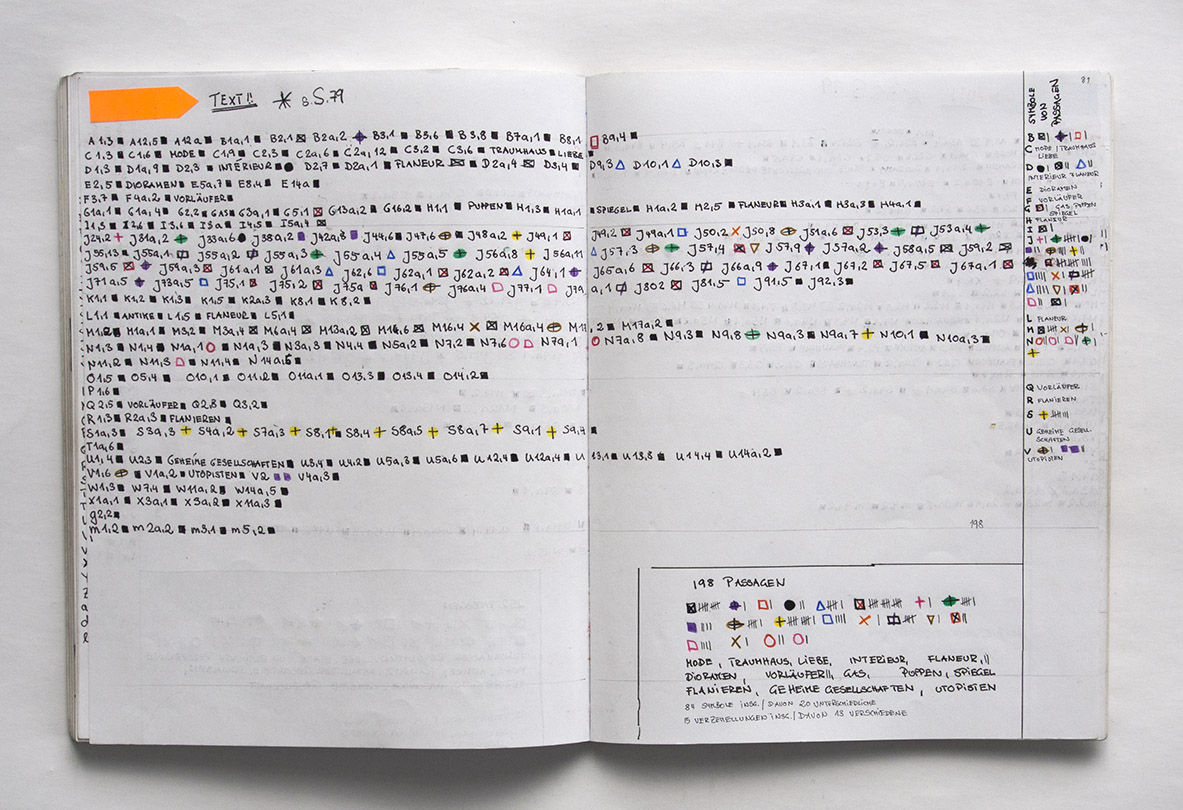 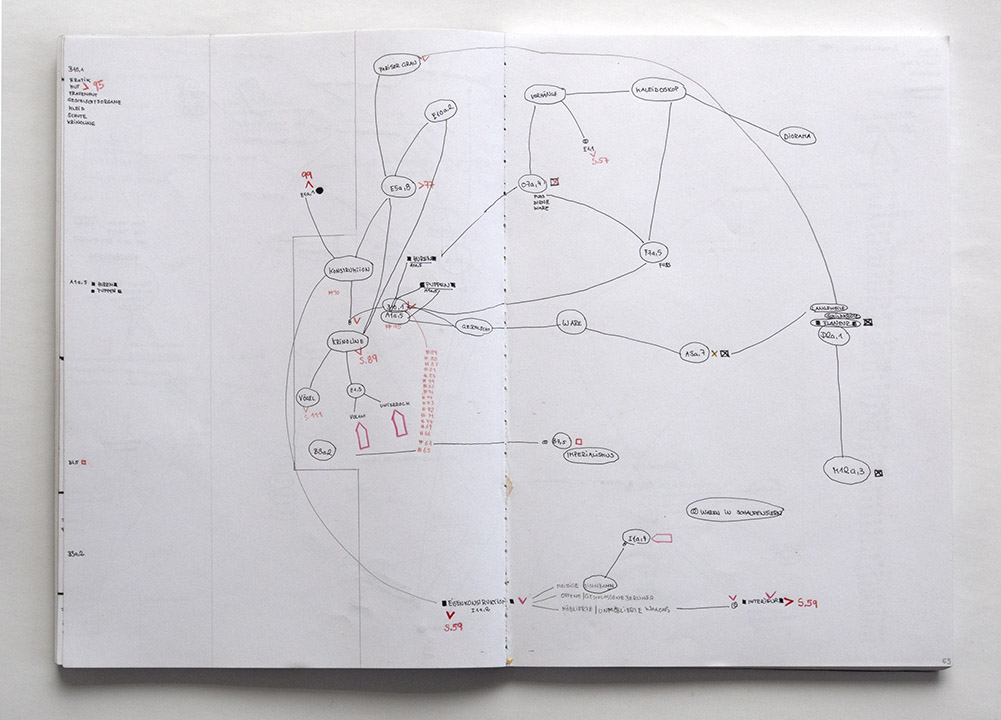 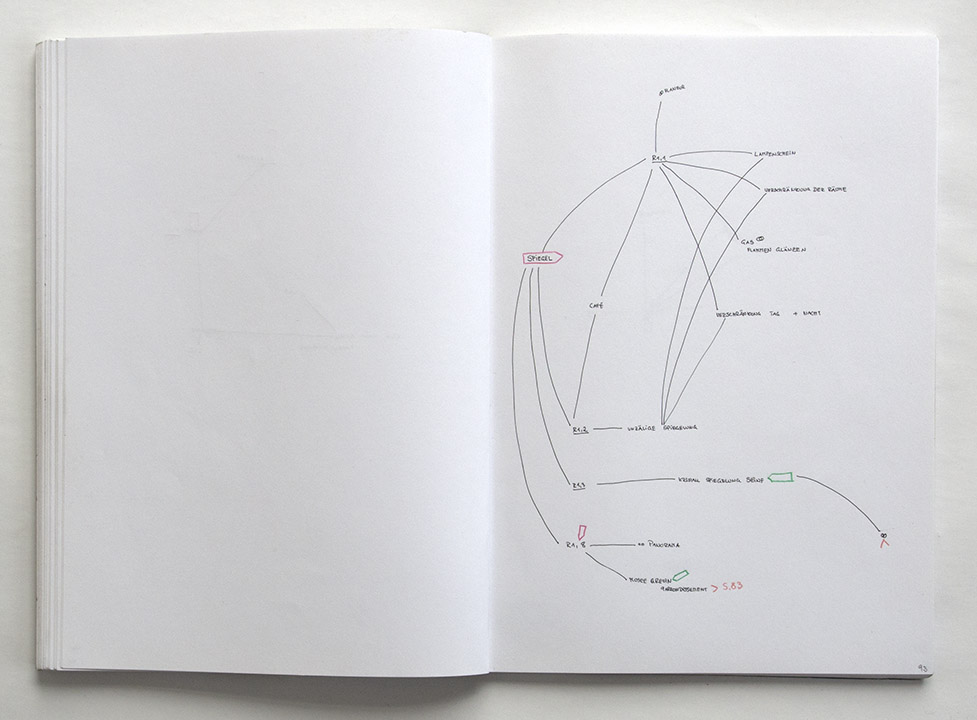 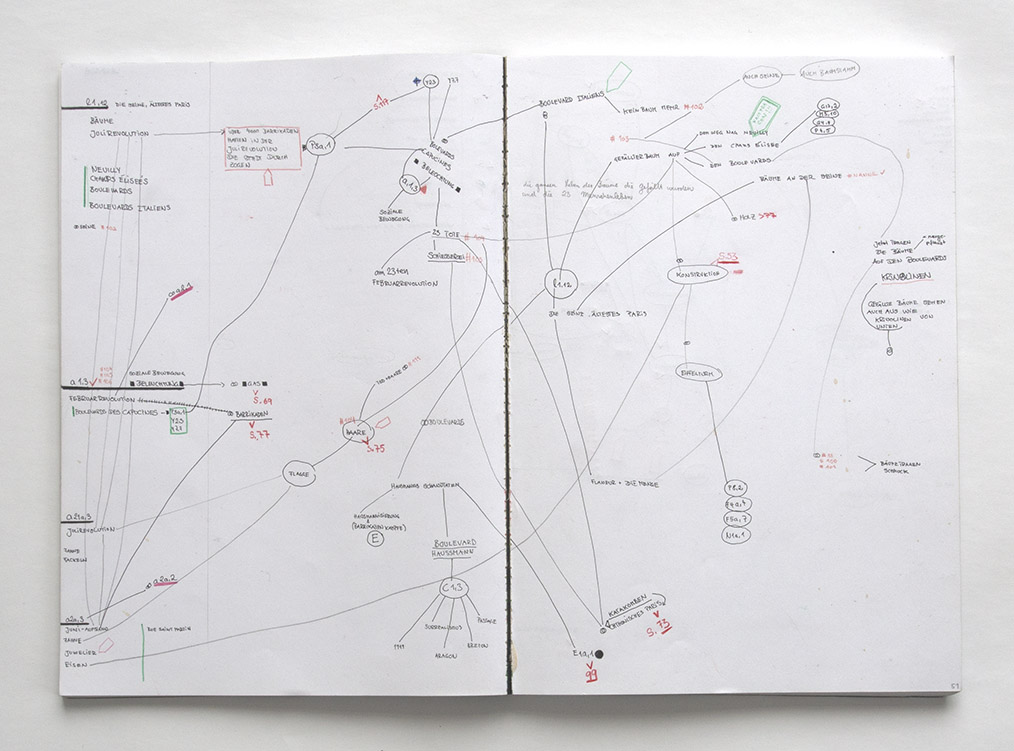